to the Blue Mountains National Park

The inclusion of these areas into the Blue Mountains National Park will protect areas of conservation significance which have threatened species, geological features and/or aboriginal heritage.

Each of the areas either consolidate or rationalise existing National Park boundaries to improve management for conservation.

Most have increasing recreational use, requiring active management to avoid degradation. 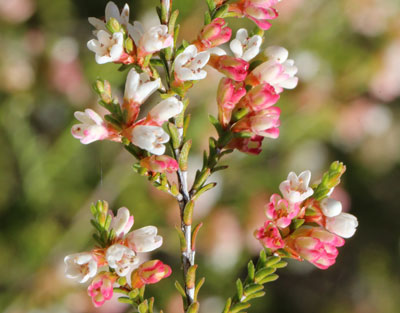 The floristic abundance of its sandstone fringes and escarpments includes unusual and rare flora species. It is a place of Aboriginal cultural significance.

The addition of the West Glenbrook site to Blue Mountains National Park would:

Here's a map of West Glenbrook. 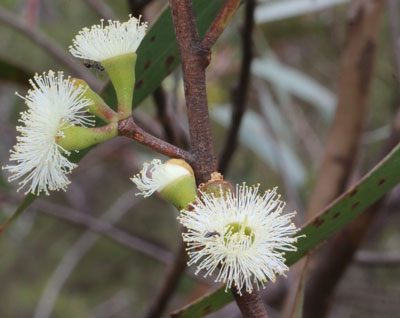 Faulconbridge Mallee (Eucalyptus burgessiana)  (Mark Baker)
From the heaths of the plateau to the Blue Gum forest of the deepest valley this land supports a great diversity of life forms.

It is a critical site for the rare Faulconbridge Mallee Ash (Eucalyptus burgessiana) and provides habitat for a range of threatened species. It is a place of significant Aboriginal cultural heritage.

The addition of the Hillcrest Ave and Meeks Cr properties to the National Park would: 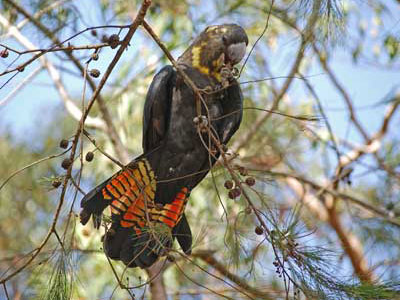 Glossy Black-cockatoo (female)  (Jill Dark)
Kings Tableland natural areas are a mosaic of heath and woodland communities and a major feeding location for bird life from autumn to spring.

The Glossy Black-Cockatoo is species-dependent, relying heavily on the Allocasuarina distyla (Scrub She-oak) growing here as a major food source.

The annual Honeyeater migration regularly pauses here for food and rest in April & May, returning throughout Spring each year. Butterflies migrate in huge numbers during October & November, feeding on the many white-flowering species present.

The addition of the Kings Tableland site to the Blue Mountains National Park would:

Here's a map of Kings Tableland. 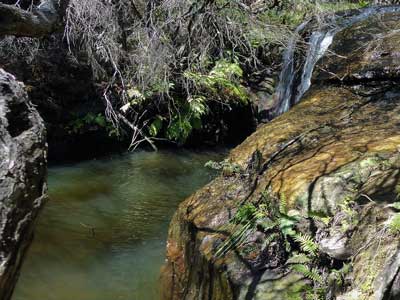 Katoomba Creek  (Lyndal Sullivan)
This proposal is to give protection to lands surrounding the watercourses and swamps which flow into Govetts Creek. The Govetts Creek sub-catchment is critical for the protection of the Grose River system and Wilderness Area located within the Greater Blue Mountains World Heritage Area.

It will provide a continuous corridor of protected natural areas by linking the isolated section of National Park around Cascade Dam to the main area of the existing National Park and the Minnehaha Falls Crown Reserve. These missing lands along Govetts Creek are also important for the endangered Blue Mountains Swamps they each contain.

The addition of the 3 parcels in the Govetts Creek Catchment to the Blue Mountains National Park would:

Here's a map of the Govetts Creek Catchment.

Radiata Plateau  (Kamil Sustiak)
Radiata Plateau (also known as Elphinstone) is the last remaining undeveloped peninsula-plateau in the upper Blue Mountains and is famed for its dramatic escarpment and stunning views along the southern escarpment.

Here's a map of Radiata Plateau.

Acacia asparagoides  (Alan Page)
﻿
© 2020  Blue Mountains Conservation Society Inc.
We acknowledge the traditional custodians of this land
– the Dharug and Gundungurra people –
and pay respect to their Elders past, present and emerging.
website by Waratah Software