Butterbox Point at dawn
click the image to access a scrollable panorama
The GBMWHE is based on an original idea by David Brazil.

The Society applied for and received a grant from the Australian Government’s Caring For Our Country initiative.

Aaron Spence of Panedia was commissioned to take a series of 360° panoramas of the Greater Blue Mountains World Heritage Area's national parks and reserves.

Access to National Parks - especially Jenolan Caves and Kedumba Valley - were provided by the NSW National Parks and Wildlife Service. Thanks to Jacq, Arthur and Ted. 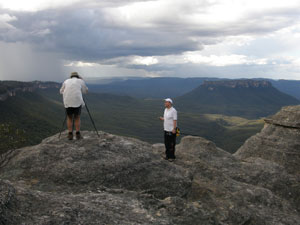 Ian Brown & Aaron Spence
at Kevins Watch  (Alan Page)
click the image to see a larger version
This was followed by trips to many Greater Blue Mountains lookouts and scenic locations - several of which are included in the gallery below.

The result was 33 narrated panoramas that were built into the GBMWHE website. Plus the GBMWHE DVD (now unavailable).

Many people were involved in this undertaking. In particular -

A Gallery of GBMWHE Panoramas

If the images aren't shown, try reloading the webpage.