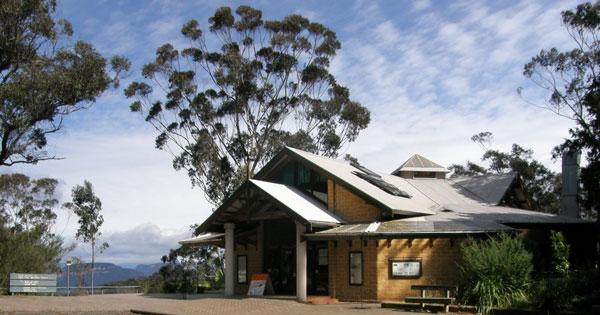 The Conservation Hut
﻿
About Us - Our History
also see our timeline 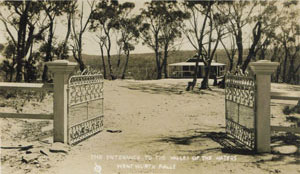 The kiosk and gates (now gone)
as they were in the 1930s.
Courtesy of "Blue Mountains Historical Society"
The Katoomba and District Fauna and Flora Protection Society (the original name of the BMCS) was formed in 1961, when a group of concerned residents met to determine the action that they could take to help protect the Blue Mountains environment. The name was changed the next year to the Katoomba and District Wildlife Conservation Society.

The Society rented a derelict tea room at the Valley of the Waters picnic area at Wentworth Falls.

The building, privately erected in 1930, but then owned by the Blue Mountains City Council, was renovated by Society members. 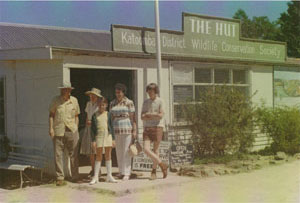 The kiosk in the 1960s.
Courtesy of "Blue Mountains Historical Society"
The restored building, subsequently known as the Conservation Hut, was officially re-opened by the Minister for Conservation on 28 July 1963.

The Society operated tea rooms at the Hut during school holidays and at weekends until the Hut was demolished in 1990.

As well as being a venue for light refreshments, the old Hut was used as an information and education centre. Displays were presented on aspects of the Blue Mountains ecology and local conservation issues. The Hut took on a museum type atmosphere with its varied displays.

The Hut was the headquarters for the planning and execution of the environmental protection campaigns waged by the Society in the first three decades of its existence.

Monthly public meetings were held in the Hut, where conservation matters were discussed, and members were addressed by a guest speaker. 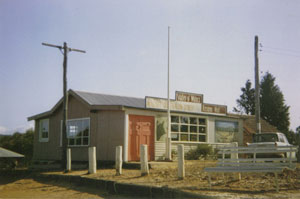 The kiosk in the 1960s.
Courtesy of "Blue Mountains Historical Society"
Funds raised from the activities at the old Hut were accumulated, with a view to buying environmentally sensitive land and returning it to public ownership. As a result of this activity, a 25 hectare landholding in the Kanangra Boyd National Park was acquired in 1995, and incorporated in the National Park. The society contributed $40,000 toward the purchase of the land.

In the 1980s, the Hut and its surrounding land was transferred to National Parks and Wildlife Service.

In 1990, the old Hut was demolished by NPWS. The replacement building, owned by NPWS, is leased to a private operator who runs a restaurant. 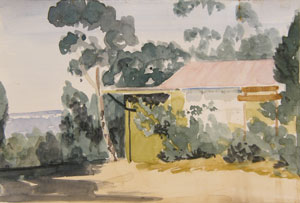 In 1996 the two societies merged to become the present body, the Blue Mountains Conservation Society Inc. The Conservation Hut remains the Society's headquarters and the Black Cockatoos its logo.

An important goal of the enlarged Society (then comprising 500 members) was to obtain World Heritage status for the Greater Blue Mountains area of 1.03 million hectares, since it is an outstanding example of universal natural values, particularly its rugged scenery, biological diversity and vast expanses of wilderness. This status was achieved in 2000.

The Society celebrated its 60th anniversary with a special edition of Hut News that contained many reminiscences. The Society timeline webpage was created from this edition.