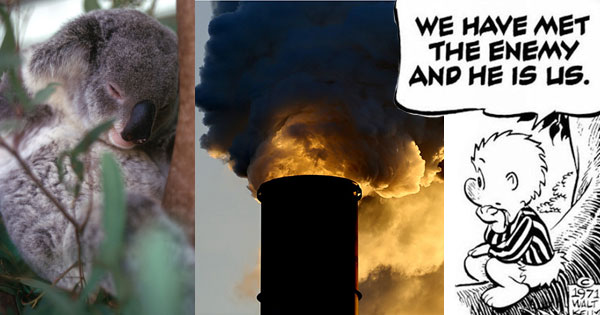 This section contains views and opinions by Society members about climate change.

Why I Support Extinction Rebellion  (by Alan Page)

Many of our members support Extinction Rebellion - and I wish we didn't need to.

Walk Against Warming in 2007  (Alan Page)
(click the image to see a larger version)
I first became a climate change activist in 2007 working with Robin Mosman, Rosemary Lathouris and George Winston on the Citizens Climate Campaign.

We prepared emails for the Campaign's 1,000+ supporters to send to State and Federal Parliamentarians.

One of our sayings was -

"If the government has no vision, then the people must give them one."

I then worked with the late Sue Morrison on Katoomba Climate Action Now.

In 2009, I met Tara Cameron, then President of the Blue Mountains Conservation Society, and the rest, as they say, is history.

For decades we have fruitlessly tried to influence our parliamentarians to accept climate change and act. But there comes a point when you realise that stern emails, letters and peaceful rallies aren't working. Then what?

This article in The Age newspaper explains why I support Extinction Rebellion.

The following video also sums it up well - but be warned, it has several expletives. The Extinction Rebellion Returns 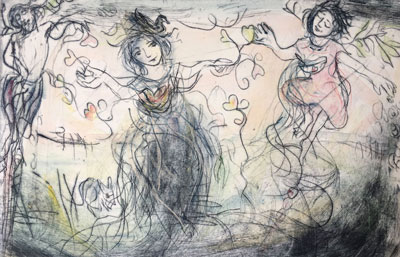 Artwork by Cate Dudley
I’ve been reading and listening to information about ‘Deep Adaptation’. It’s confronting and engages with the climate crisis in ways that many people find challenging. However, I’ve chosen to discuss it here as I think part of my role in writing these monthly pieces is to offer food for thought and ‘Deep Adaptation’ most certainly does this.

In 2018, Professor Jem Bendell published a paper titled Deep Adaptation: A Map for Navigating Climate Tragedy. Despite its premise that we are heading for societal collapse the paper went viral and has been the basis of rich conversations across many activist, academic and concerned citizen forums. I can only give a sense of the paper here, so if this triggers any interest for you, please explore it further at the links below.

The paper draws on research into climate science to argue for the high probability that the impact of disruptive climate change will cause near term societal collapse, across all countries and socio-economic levels. Consequently, Jem Bendell argues that we need to consider how we can ‘deeply’ adapt to this in a way that confronts this collapse as a reality. He acknowledges the grief that arises in this approach, and he recognises that people argue that such a vision of the future is not helpful as it can cause feelings of hopelessness. However he argues that communicating with others from this viewpoint, liberates creativity and builds collaboration and community in ways that cannot occur when we are repressed by denial. This also enables us, he says, to ‘ relax into our hearts, notice the impermanence of life, and let love for this momentary experience of life in all its flavours flood our being and shape our next steps’.

Jem Bendell describes Deep Adaptation as a philosophy, framework and range of initiatives aimed at reducing harm in the face of societal collapse. Part of this approach is the development of the ‘Deep adaptation agenda’ which he suggests can be a useful framework for community dialogue in the face of climate change. This is based on four ‘Rs’: Resilience: how do we keep what we really want to keep? Relinquishment: what do we need to let go of in order to not make matters worse? Restoration: what do we bring back to help us with the coming difficulties and tragedies? Reconciliation: What could we make peace with to lessen suffering?

As you can imagine there have been hugely varied responses to this paper, one of which was a funding grant to establish the Deep Adaptation forum where you can read about this in much greater depth. Others, such as author Jeremy Lent strongly critiqued the paper arguing the need for Deep Transformation rather than adaptation, and you can listen to a fascinating discussion between him and Transition town founder Naresh Giangrande about this at the podcast link below.

For further exploration of these ideas have a look at:

This section contains articles and news about climate change. 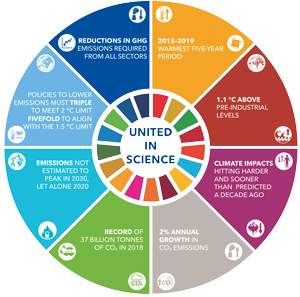 It underlines the glaring – and growing – gap between agreed targets to tackle global warming and the actual reality.

The report, United in Science, includes details on the state of the climate and presents trends in the emissions and atmospheric concentrations of the main greenhouse gases.

It highlights the urgency of fundamental socio-economic transformation in key sectors such as land use and energy in order to avert dangerous global temperature increase with potentially irreversible impacts.

Highlights from the report include:

This section contains links to organisations whose aim is to provide information about climate change and related issues, as well as actions that can be taken.

We are a group of grandparents greatly concerned about the impact climate change will have on the future of our and everyone else’s grandchildren.

We decided to transform our deep concern about this into taking action, to increase the pressure on the Australian Government for them to declare a Climate Emergency and introduce major policies to reduce carbon emissions.

Our aim is to make it easy for other grandparents (and other senior citizens) to do this too. Understanding that for many of us some of the usual protest actions such as rallies in the city may be too hard for reasons of age or health, we have devised this easy way for grandparents to continue pressure for political action without leaving home!

We are school students from cities and towns across Australia. Most of us have never met in person before but are united by our concern about our planet.

We are striking from school to tell our politicians to take our futures seriously and treat climate change for what it is - a crisis.

Politicians can show us that they care by taking urgent action to meet our demands:

The Stop Adani movement is made up of thousands of individuals and community groups across Australia.

Our mission is to use our power to protect the climate now and for future generations.

We will inspire and train older Australians to stand alongside young people and demand climate justice through bold nonviolent action.

We will strategically challenge political parties failing to address our climate emergency or provide a just transition for affected communities. We will peacefully target corporations damaging our climate or corrupting politics. We will never give up.

We believe that a global grassroots movement can hold our leaders accountable to the realities of science and the principles of justice.

The movement is rising from the ground up all over the world and is uniting to create the solutions that will create a better future for all.

350.org Australia is a not-for-profit project helping build this movement from our corner of the globe.

The Australian Youth Climate Coalition is Australia’s largest youth-run organisation, our mission is to build a movement of young people leading solutions to the climate crisis.

Young people have the most to lose from global warming, but we also have a lot to gain.

Climate change is our best opportunity to create a world that works for everyone, not just a few.

We can power our lives with the wind and sun, and ensure access to clean energy and job opportunities for all.

We are a network that supports our members and their allies to take actions to protect people at home and abroad from climate change, to safeguard our natural environment, and to build a fair, clean, healthy Australia for everyone.

We provide authoritative, expert advice to the Australian public on climate change and solutions based on the most up-to-date science available.

The Lock the Gate Alliance is a national grassroots organisation made up of over 120,000 supporters and more than 450 local groups who are concerned about risky coal mining, coal seam gas and fracking.

These groups are located in all parts of Australia and include farmers, traditional custodians, conservationists and urban residents.

Project Drawdown is a world-class research and communication organization which serves as a non-partisan, non-commercial, highly-trusted source of solutions to reverse global warming.

Project Drawdown is shifting the larger global conversation on climate change from “doom and gloom” to a sense of opportunity, possibility, and hope for the future.

We collaborate with media and non-profit partners to further spread our messages to global audiences.

The Intergovernmental Panel on Climate Change

The Intergovernmental Panel on Climate Change (IPCC) is the United Nations body for assessing the science related to climate change.

The IPCC provides regular assessments of the scientific basis of climate change, its impacts and future risks, and options for adaptation and mitigation.