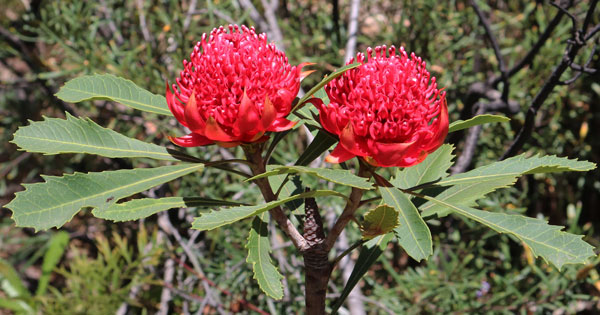 Waratahs  (Alan Page)
﻿
Links
A collection of links to organisations with similar aims as the Blue Mountains Conservation Society.

The links are grouped into:

Hawkesbury Environment Network aims to conserve and restore the natural environment of the Hawkesbury region.

To bring together people and organisations to increase awareness of and act for sustainability and the environment.

The Lithgow Environment Group seeks to preserve the balance of nature in its region. This is especially important given the impacts of the area's industrial heritage.

The Lithgow region contains some of the most biodiverse bushland in the Greater Blue Mountains. We would like to promote this rich natural heritage, especially given that it has often been under recognised.

The Blue Mountains Bushcare program traces its beginnings to 1989 when volunteer groups started to form.

Since 1992 these community efforts have been supported by Blue Mountains City Council, which now provides Bushcare Officers, tools, and on-site training.

There are now over seventy-five bushcare and landcare groups. For every hour that Council puts into the program the community puts in more than three. It is a true community movement.

Blue Mountains Bird Observers is a community group open to all who are interested in the bird life of the Blue Mountains, NSW.

They have approximately 190 members, ranging from beginners to experienced birdwatchers. New members are always welcome.

Blue Mountains Nature aims to provide comprehensive information on the natural heritage of the Blue Mountains, supported with artistic responses to the local environment and profiles of conservationists who have played a significant role in the region.

It inspires and informs with a combination of visual, artistic, personal and technical content.

We work with local communities, universities, and government agencies to monitor and respond to these threats, developing innovative solutions for the complex challenges of conservation and sustainable living.

STOP CSG Blue Mountains is a group of Blue Mountains people who are concerned to protect the environment from the destruction wrought by Coal Seam Gas mining.

We object to the levels of noise and air pollution it will cause in our Blue Mountains World Heritage site and across Western Sydney and of the harmful impacts generally that noise, air pollution and traffic congestion will cause to the health and wellbeing of the people that live in these communities.

The prime focus of The Habitat Advocate website is to advocate the conservation of wildlife and native habitat. They are concerned about the persistence of many forms of human threats to wildlife and to native habitats throughout the Blue Mountains bioregion, across Australia and indeed around the world. They seek to publicise and openly challenge all threats.

We focus on the ‘Cumberland Plain’ of Western Sydney, one of the most heavily cleared landscapes in Australia. This already heavily cleared and fragmented region is now being cleared and developed at an even more rapid rate with little or no planning to conserve key linkages for wildlife.

The Mudgee District Environment Group (MDEG) is based in the Mid-Western Region local government area of NSW, within the central tablelands on the Great Dividing Range.

The Nature Conservation Council of NSW was established in 1955 to provide a shared voice for community environmental organisations from across New South Wales.

We are the leading advocates for nature in New South Wales. Representing more than 160 community organisations with a combined membership of over 60,000 individuals, we are a force for positive change.

EDO NSW is a community legal centre specialising in public interest environmental law. We help people who want to protect the environment through law.

The National Parks Association of NSW (NPA) has been established as a conservation organisation for 60 years. They also run one of Australia’s largest bushwalking clubs with a network of 16 branches, hundreds of active volunteers and over 40,000 supporters.

NPA has played a role in the establishment of many of NSW’s national parks and nature reserves.

Rivers SOS is an alliance of over 40 environmental and community groups concerned with the wrecking of rivers in New South Wales by mining operations.

Rivers SOS exists for the protection of the integrity of river systems and water sources from the impacts of mining and other extractive industries.

The Invasive Species Council was formed in 2002 to seek stronger laws, policies and programs to keep Australian biodiversity safe from weeds, feral animals and other invaders.

Their focus is on prevention and early action.

The Total Environment Centre believes in a fairer, greener world for all.

We’ve worked with you for over 40 years to preserve the ecosystems that support living landscapes and healthy communities across Australia.

The Wilderness Society is powered by over 30,000 Australians from all walks of life.

We work to support the living world that makes all life possible. (Including our own.)

Together, we're taking on transnational corporations, rogue operators, and the armies of lobbyists and politicians who defend them. From the corridors of Canberra to the streets of your town, we’re here to change the system.

The Lock The Gate Alliance is a national grassroots organisation made up of over 120,000 supporters and more than 450 local groups who are concerned about risky coal mining, coal seam gas and fracking.

These groups are located in all parts of Australia and include farmers, traditional custodians, conservationists and urban residents.

Our vision is of healthy, empowered communities which have fair, democratic processes available to them to protect their land and water and deliver sustainable solutions to food and energy needs.

It works on many fronts to encourage informed public debate about how Australia and the world can achieve an ecologically, socially and economically sustainable population.

The Clean Energy Council is the peak body for the clean energy industry in Australia.

We represent and work with hundreds of leading businesses operating in solar, wind, energy efficiency, hydro, bioenergy, energy storage, geothermal and marine along with more than 5000 solar installers.

We are committed to accelerating the transformation of Australia’s energy system to one that is smarter and cleaner.

The Australia Institute is one of the country’s most influential think tanks. Based in Canberra, it conducts research on a broad range of economic, social, transparency and environmental issues in order to inform public debate and bring greater accountability to the democratic process.

In 2017 The Australia Institute was selected to carry over the Climate Institute’s legacy and remaining intellectual property including continuing the benchmark Climate of the Nation report.

Greenpeace is the leading independent campaigning organization that uses peaceful protest and creative communication to expose global environmental problems and promote solutions that are essential to a green and peaceful future.

Planet Ark is an Australian not-for-profit organisation with a vision of a world where people live in balance with nature. Established in 1992, we are one of Australia’s leading environmental behaviour change organisations with a focus on working collaboratively and positively.

Bush Heritage are national leaders in landscape-scale conservation. We're independent and evidence-based. Our purpose is to return the bush to good health. We work where we're needed most: in areas of high conservation value with low levels of protection.

Wilderness Australia, formerly the Colong Foundation for Wilderness, the successor to Myles Dunphy's National Parks and Primitive Areas Council, is Australia's longest-serving community advocate for wilderness. Its proposal for a Wilderness Act was accepted in 1987.

Wilderness Australia exists to prevent the collapse of nature by building a network of wilderness areas and resilient ecosystems across Australia.

Over the past 50 years, the World Wildlife Fund (now known as WWF) has grown into the largest and most influential independent conservation organisation in the world.

We have over five million supporters globally and we operate in more than 100 countries. In 1978, WWF was established in Australia.

Today, we're the nation's largest conservation organisation, with more than 500,000 supporters and projects underway throughout Australia and the Oceania region.

Sea Shepherd Australia is a non-profit conservation organisation whose mission is to end the destruction of habitat and slaughter of wildlife in the world’s oceans in order to conserve and protect ecosystems and species.

By safeguarding the biodiversity of our delicately balanced oceanic ecosystems, Sea Shepherd works to ensure their survival for future generations.

Earth Justice is the United States' premier environmental law organization. We believe that everyone has the right to a healthy environment. Since our founding more than four decades ago, we’ve defended that right by using the power of the law to fight for the earth and its inhabitants.

True and lasting change happens when the power of the law is on your side. That is why the earth needs a good lawyer.

Green Biz advances the opportunities at the intersection of business, technology and sustainability. Through its websites, events, peer-to-peer network and research, GreenBiz promotes the potential to drive transformation and accelerate progress — within companies, industries and in the very nature of business. ﻿
Contact us   © 2022  Blue Mountains Conservation Society Inc.
We acknowledge the traditional custodians of this land
– the Darug and Gundungurra people –
and pay respect to their Elders past, present and emerging.