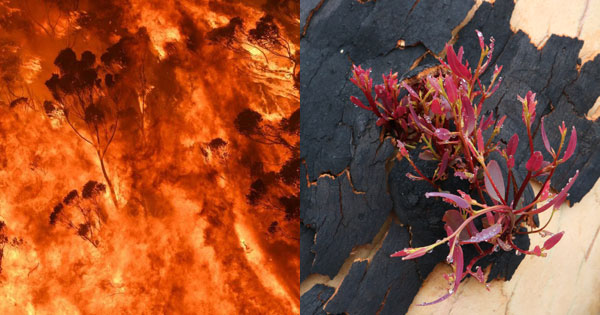 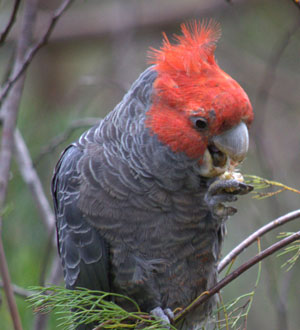 Gang-gang Cockatoo  (Anne Ashford)
The 2019−20 bushfires across Australia have been devastating. Their extent, duration, timing and ferocity has been unprecedented.

Genetic diversity in the area will be greatly reduced, species may be lost from the area. Many species, and possibly ecological communities, will be locally threatened. Our world renowned biodiversity is at risk and it is imperative that we work to restore and protect it.

Prolonged and extreme high temperatures with greatly reduced rainfall, extraordinarily low humidity and periods of high winds, have produced fire conditions and behaviours not seen on such a wide scale before in the Blue Mountains or Australia.

This extreme conditions exemplify the predictions of climate scientists in regard to the impacts of global warming and rapid climate change.

The society 's priorities will be to advocate for the urgent recovery and protection of our precious national parks including sufficient funding and resources and for real action on climate change. 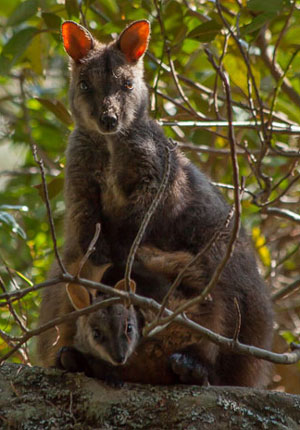 The burnt area of each of the eight reserves of the GBMWHA has been calculated.

The densities are very rough estimates, but are the best available for NSW.

In any case, it is clear that huge numbers of animals have been impacted and most of them have died as a result of the drought, the fires and the shortage of food, water and shelter after the fires.

The unprecedented scale of the fires, leaving few unburnt refuges from which to recolonise, makes the recovery of the fauna highly problematic.

The first map (8MB) shows the burnt and unburnt areas of the GBMWHA including whether the canopy is burnt.

The second map, produced by the Federal Dept. of the Environment, has more geographical detail and also shows burnt areas outside of the GBMWHA - but doesn't show the extent of the burn (canopy, understory, etc.).

Both maps are vector PDFs so you can zoom in on them.

[* Density of mammals, birds and reptiles in NSW is based on C. Johnson, H. Cogger, C. Dickman and H. Ford (2007), Impacts of Landclearing: The Impacts of Approved Clearing of Native Vegetation on Australian Wildlife in New South Wales, WWF-Australia, Sydney.] 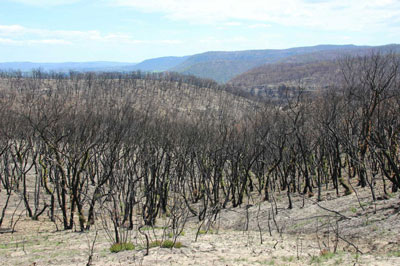 Extreme severity fire, Bell  (Peter Smith)
95% of the 32,728ha of the proposed Gardens of Stone SCA was burnt, and an estimated 5 million native animals impacted.

How heat and drought turned Australia into a tinderbox
Here's an article from the ABC published on 19 February.

It may take a few moments to load and you'll need to scroll down to see the text with the associated background map showing the increasing extent of the bushfire.

Caution: This presentation (like many other media) includes some errors on Blue Mountains fires, so there may be more. For instance, it was not the ‘Gospers Mountain fire’ that impacted Bilpin, but the fire that originated with a backburn near Mt Wilson, which became a completely separate fire and was then labelled as the ‘Grose Valley fire’. Also, while the view that wilderness fires are hard to put out is generally true, some of this season’s remote lightning strikes in the Blue Mountains were either not attacked or attacked weakly due to resource constraints and other issues. It is understood that 20 other lightning strikes were put out in the Greater Blue Mountains World Heritage Area this season. The statement that there are not many ‘breaks’ in wilderness to help with firefighting is also partly true. In the Greater Blue Mountains, many breaks such as gorges, watercourses and rainforest were used effectively, and others could have been used.

Here's the ABC's How heat and drought turned Australia into a tinderbox.

2019-20 Bushfires Articles
Recovery
♦  Where To Now     ♦  Recovery Articles     ♦  Bushfire Inquiries and Climate Plan
Where To Now?
The recovery of the flora and fauna of the Greater Blue Mountains is expected to take many years and remains uncertain in several areas.

The uncertainty is caused by - 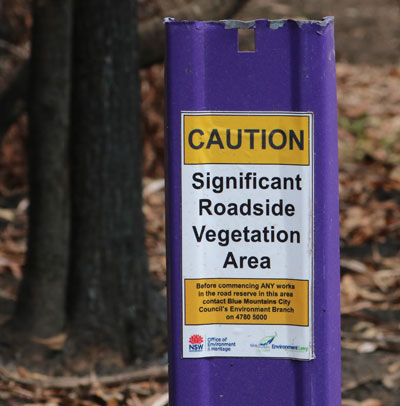 Significant Vegetation Area  (Alan Page)
A significant and essential first step in the recovery is increased funding to the National Parks and Wildlife Service (NPWS). The NPWS needs to have the resources to manage the recovery - a recovery that will take years.

"Biodiversity hotspots" that local conservationists are familiar with need to be quickly assessed and protected.

It is also suggested that appropriately resourced studies be undertaken that will provide a better understanding and metrics of the impact that this bushfire has had .

There's a backdrop that underpins the recovery, and that is even without the recent bushfires and heavy rain, that the Greater Blue Mountains was undergoing a transition due to climate change. Trees and scrubs were dying due to the drought; rainforests were drying out; fauna were moving to find new sources of food.

Sustaining the recovery effort now that it's off the front page is crucial.

Here are the 2020 reports from the Royal Commission into National Natural Disaster Arrangements and the NSW Independent Bushfire Inquiry (all documents are around 18MB each):

And here's the Society's submission to the NSW Independent Bushfire Inquiry.

In June and July 2020, the Emergency Leaders for Climate Action (ELCA) hosted Australia’s first virtual bushfire and climate change summit to coordinate a national response to the Australian climate and bushfire crises.

The 2020 National Bushfire and Climate Summit brought together hundreds of participants from across the country and the world to share their experiences, and to formulate recommendations to address the worsening risk of devastating bushfires fuelled by climate change.

The Australian Bushfire and Climate Plan is the culmination of that effort.

The Australian Bushfire and Climate Plan provides a broad plan and practical ideas for governments, fire and land management agencies and communities to help us mitigate and adapt to worsening fire conditions.

The plan’s 165 recommendations include many measures that can be implemented right now, to ensure communities are better protected.

The experts agree: We must tackle climate change and worsening extreme weather by urgently phasing out fossil fuels.

The Blue Mountains Conservation Society participated in this summit and endorses this plan.

An ad for the plan appeared in The Australian on 1st August.

What You Can Do!

It's early days in the recovery - very early.

We'll keep you informed with updates and articles on this journey. And we'll be asking you to be involved in various activities over the next few years. Activities including events and writing submissions, and generally supporting our initiatives.

We'll endeavour to present clear and correct views without the spin and half truths that have unfortunately been part of the reporting in some quarters of the media. [For example, arsonists were not a major cause].

And please give some thought to donating to the Foundation of National Parks and Wildlife or WIRES (NSW Wildlife Information, Rescue and Education Service). But do your own research.

Lastly, when bushwalking - especially in burnt and recovering areas - please stay on the designated tracks.

♦  How are bush fires managed in NSW?
♦  How does remote area firefighting work?

♦  Firefighting Articles
Can we reduce the impact of bush fires made worse by climate change?
by Ian Brown  (24 January 2020) 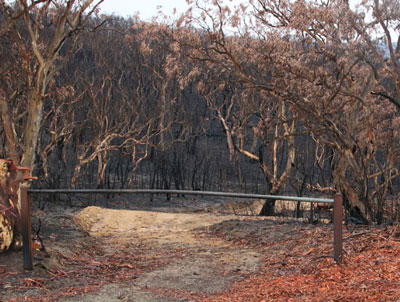 Amidst the horror of this season there has been much talk of the fires being unpredictable and unmanageable, of ‘mega-fires’ that were too big to put out.

It's true that we have seen unprecedented dryness in the landscape (driven by climate change), burning on a vast scale and shocking fire behaviour. But a sense of helplessness is not helpful.

Firefighting and community efforts have not been helpless, they have been heroic and admirable, but are there things we can do, at the operational level, to manage fires better? Could we reduce the size of fires and hence their impact on both people and the environment, even in these difficult times? Many fire managers and fire scientists think so. 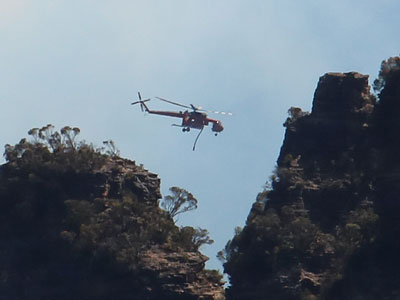 Gypsy Lady above The Three Sisters, December 2019  (Alan Page)
What goes on behind the scenes when bushfires are marching across the landscape and burning down houses, battled by courageous people in yellow overalls and red trucks?

You could easily think that the crews out there on the ground decide strategies and make key decisions.

But the activity you see is the ‘tip of the spear’, with a large and complex operation driving it.

How does remote area firefighting work?
by Ian Brown  (24 January 2020) 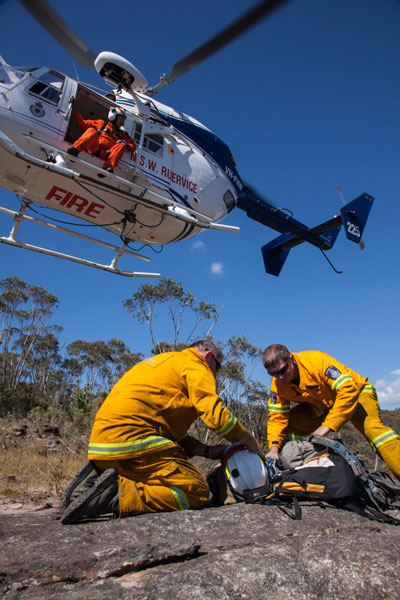 Another load arrives at the fireground, Wollemi National Park  (Ian Brown)
Remote area firefighting (RAF) and RAF teams (RAFT) don’t get much media attention but are a critical part of fire management, especially in large national parks and other remote bushland.

‘Remote’ means anywhere not readily accessible to firefighting trucks. Fires that start in such locations, often from lightning, are particularly challenging. 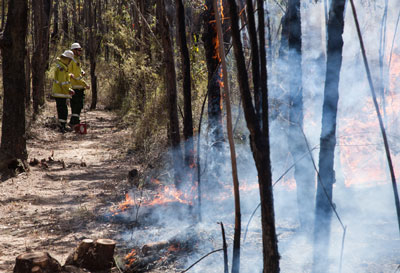