The Deaths of Wombats first appeared in the Society's Hut News as a three part series in July, September and October 2020.

Part 1 - The Deaths of Wombats 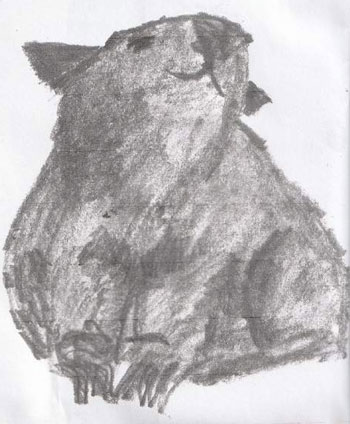 A Wombat  (Drawing by Anna Culliton)
This is the first of three stories about wombats, their struggle for survival and the projects that are attempting to protect them. These stories will appear in instalments in the next three issues of The Hut News.

Stories of wombats are firmly embedded in Australian culture. They feature in children’s literature, in Aboriginal dreaming stories and long time favourites such as Norman Lindsay’s The Magic Pudding. But the image of the cuddly wombat baby belies the reality of their struggle to survive in ever shrinking and fragmented habitats. Their habitat, which used to extend along the Great Dividing Range from Queensland through NSW to Victoria and South Australia and Tasmania is diminishing and threatened.

Stories about wombats that resonate at the present time are The Death of a Wombat written by Ivan Southall, illustrated by Clifton Pugh and current stories told by Anna Culliton, Wires volunteer, and artist from the Kanimbla Valley. The Death of a Wombat first appeared as a prize winning ABC radio play and was then published in 1972.

This was a time of great social and political change in Australia and one indication of a newly emerging nationalism was the flourishing of native plant groups and interest in conserving wildlife and habitat.

The Death of a Wombat is an imaginative word picture and an allegory set in rural Victoria in a time of a drought that led to the bushfire that resulted in the death of the wombat.

But ultimately it is a celebration of the wombat and all native wildlife. The animals are unique, Australian and, above all, wild.

The wombat trundles the sand away, using his nose as a spade. Then he lies on his side to dig, and mends his burrow. He makes a much better job of it than the impatient rabbit.

It is a strong call for nature conservation and protection in a more optimistic era and is well worth revisiting. The tough but fragile ecosystem inhabited by the wombat that Southall and Pugh portray is more urgently documented 50 years later by Anna Culliton in a world of human induced climate change, drought, a black summer of widespread bush fires, floods, human pandemic and political upheaval.

Anna’s story will appear in the August edition of the Hut News. 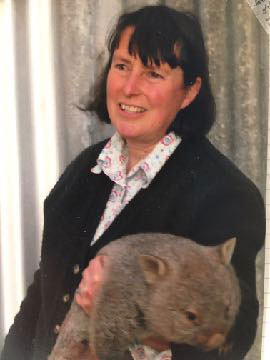 Anna Culliton
Anna Culliton is a registered wildlife carer and Wires volunteer in the Kanimbla Valley.

Her work with wombats is particularly significant in the Kanimbla where a history of poor farming practice, rabbit plagues and drought has affected biodiversity. Among the populations of wild animals that have managed to survive is the bare nosed wombat otherwise known as the common wombat. As for all native animals in Australia wombats are protected.

1. What are the main threats to wombats in this area?

Anna: Humans are wombat’s greatest enemy. Habitat destruction, shooting, road kill, poisoning.......and of course, climate change, drought, fire and flooding. Here in the Kanimbla Valley we are experiencing a devastating outbreak of sarcoptic mange and it is affecting the entire wombat population.

2. How do wombats contract sarcoptic mange?

Anna: Mange is caused by a mite. If humans get it, we call it scabies. White folk brought it to Australia on the ships. It is highly contagious, and unfortunately wombats have the ideal conditions for the mites’ breeding cycle We used to think of wombats as solitary animals but as we learn more we see they actually do a lot of sharing. The mites are transferred from burrow to burrow. Foxes are big carriers and they spend a lot of time in wombat burrows. But there are no foxes in Tasmania and yet mange is rife throughout the island.

3. What happens to a wombat if it contracts mange?

Anna: It’s a slow process, but the wombat will scratch itself to death. It will become blind and deaf and won’t be able to thermoregulate. The mite burrows under the skin where the female lays thousands of eggs and then the eggs hatch. The wombat suffers from hair loss, skin thickening and crusting. Open wounds become infected and there is an increased risk of blowfly strike. They soon become unable to move freely, lose weight and die a slow, painful death. 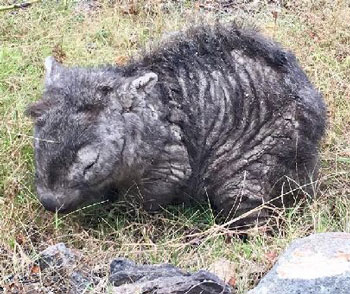 A bare nosed wombat with mange  (Anna Culliton)
4. How can mange be treated?

A lot of research is being conducted and different treatments are being debated. For now a registered wildlife carer is licensed to use Moxidexin which is made for cattle and red deer. A 20 ml dose is administered either directly onto a wombat by a pole with a scoop at the end and poured down the wombat’s back. But first of all, you need to find the wombat and be able to approach it without it disappearing.

The alternative is a flap installed at the burrow’s entrance with a dose of Moxidexin. The medicine needs to be applied every 5 to 7 days for at least 8 weeks and then followed up over the next couple of months. However as soon as a wombat with mange comes into the treated area it all starts again.

5. Are you optimistic about the survival of wombats in the Kanimbla and surrounding areas?

Anna: No and yes... Right now it’s overwhelming and devastating, but sometimes I get to see something so positive. More members of the public are reporting them to wildlife groups when they come across a sick wombat. 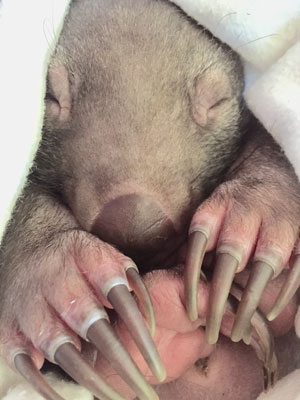 Ash in the ‘pouch’  (Anna Culliton)
This is the story of ‘Ash’, the third instalment of The Death of Wombats – but this is also a story of survival.

Ash was rescued after his mother was killed by a car on the Ganbenang Rd in the Kanimbla Valley.

Zoe, who rescued him, moved the dead wombat to the side of the road then carefully removed the tiny wombat from the pouch, bundled him up and took him to the local WIRES wombat carer Anna Culliton.

Anna remembers….It was mid-January, the summer we will never forget. When Zoe arrived the air was thick with smoke and while we were talking, we were soon covered in ash. Weighing in at 1.080 kg. the joey had a soft velvet covering of ash coloured fur. So ‘Ash’ he is!

He spent the next few weeks getting used to being in care, learning how to suck from a silicon teat and living with humans who weren’t sure when they might have to evacuate.

But then the rain came! And so did ‘Hank’ and ‘Mena’ to buddy up with little Ash. 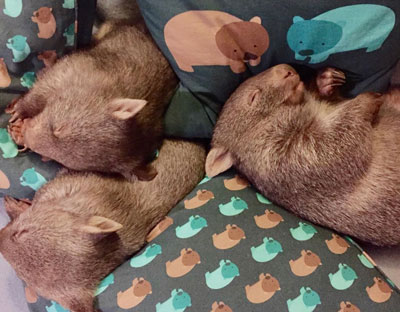 They are now teenagers and share a burrow that was built by previous occupants of the enclosure. They still have bottles twice a day, though most of their nutrition comes from native grasses supplemented by pellets and grains.

Ash and his buddies have a lot of growing to do and it will probably be another year before their gate is opened and they will make their way to be real live wombats.

Leaving the safety of his enclosure will be dangerous for Ash. His habitat needs will more than likely conflict with landowners if he establishes a burrow along a fence line or under a house.

He will face many threats including sarcoptic mange which is rife in the valley. But he has learned to be with other wombats, eat and dig and when he leaves the enclosure it will be another sign of hope for him and us. 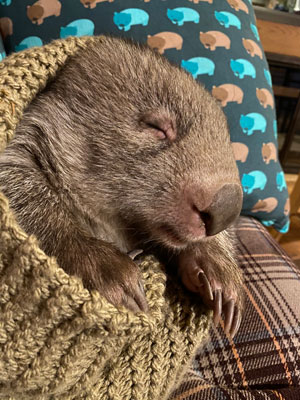 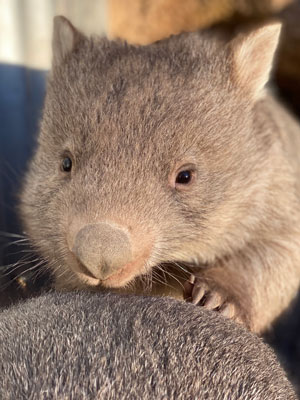 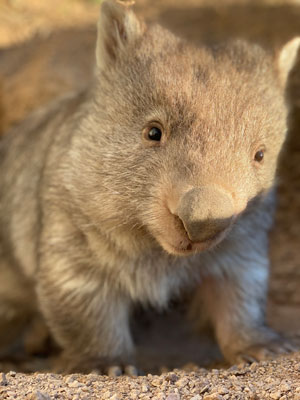 These three articles are a tribute to Anna Culliton and WIRES volunteers who spend their days and nights caring for threatened species and showing us, by example how we as a species can coexist with the unique wildlife left to us.