This article first appeared in the September 2017 edition of the Society's Hut News. It is part of a series about threatened species. 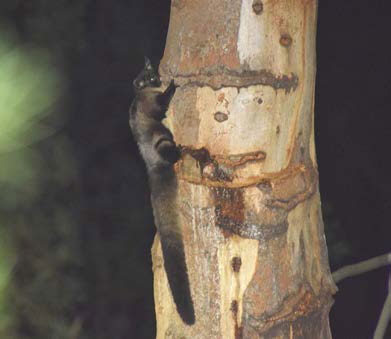 Greyish above, creamy below and, apart from the long pointed ears, fluffy all over. The tail is especially fluffy. At night, when spotlit, the eyes shine dull red and the dark markings on the legs and edges of the gliding membrane suggest a largish glider wearing a four legged pair of dark trousers.

Most special is the call – on-going whirring, bubbling, shrieking and gurgling - that starts soon after dusk and bounces between small groups of hyperactive gliders moving through the trees.

I first heard Yellow-bellies some 40 years ago in southern NSW and most recently in the Kedumba Valley last year. They made me laugh 40 years ago and still do. To hear the call is magic. 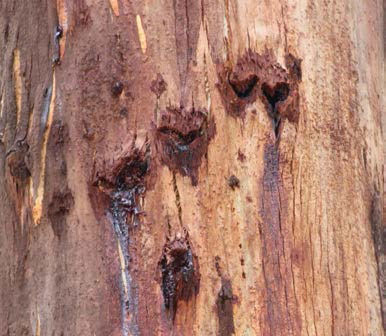 At one favoured feeding ground in the Mount Werong area of Blue Mountains National Park the Ribbon Gums appear to be covered by glider graffiti.

Daytime dens and nesting sites are in the hollows of mature eucalypts.

They are usually in tall forests on sheltered slopes and in gullies where soil fertility is relatively high, but their movement patterns and favoured feeding grounds are not well documented.

The Yellow-bellied Glider in this area (subspecies australis) is threatened (a vulnerable species) at state level. Loss of habitat, loss of hollow-bearing trees and inappropriate fire regime all threaten this species.

It is sobering to realise that of the 66 native mammals that have been recorded in the World Heritage Area, almost one half (42%) are currently considered to be threatened.