This article first appeared in the November 2017 edition of the Society's Hut News. It's one of a series about threatened species. 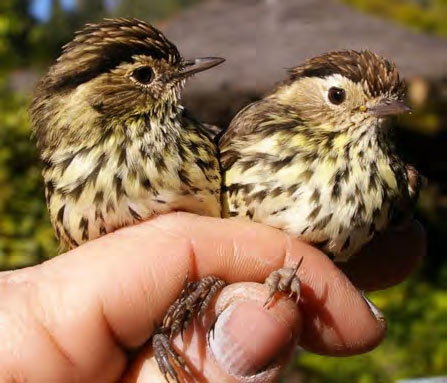 Speckled Warblers  (Darryl McKay)
I clearly remember the time I was holding a little male Speckled Warbler that was singing ever so sweetly as I put a small metal band on one leg and three distinguishing colour bands on the other.

This was during my research project at Scheyville National Park some years ago. When my colleagues and I started looking at the data we realised that this species was slowing declining in numbers. We thought that one of the main causes was predation of their nests (which are constructed on the ground) by foxes or cats.

At that time researchers at the Australian Museum were doing some great work on nest predation using motion sensing cameras to pinpoint the culprits. So we decided to give it a go.

We also wanted to recognise individuals (thus the three colour band combinations), find out who was shacked up with whom (males have black eyebrows while females have a chestnut one) and delineate their territories.

We used numbered tomato stakes to grid the study area – this was before reliable handheld GPS units were readily available and affordable. We could then map their territories and locate and mark the location of their nests.

Anyway, after completing all this lead-up work we couldn’t find our birds. They had disappeared and to my knowledge haven’t returned. We were too late!

But all is not lost. Speckled Warblers, although threatened, still remain in many areas west of the Blue Mountains and have been located within both Wollemi and Yengo National Parks. They can also be seen on the southern parts of the Cumberland Plain around Picton.

Speckled Warblers frequent open woodlands where they feed on the ground so searching for them in the gullies across the mountains will yield little success. Best to try the open wide valleys like Megalong. Happy ‘hunting’!