This article first appeared in the February 2018 edition of the Society's Hut News. It is part of a series about threatened species. 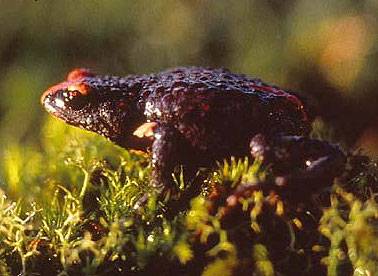 There are no native toads in Australia, only a habit of calling slow-moving, warty frogs "toads", with an added "let" if the animal happens to be small.

The "toadlet’s" head is crowned with a distinctive orange to red T-shaped patch but, dwelling mainly within leaf litter, it is seldom sighted.

The simplest way to locate them is to make a loud noise – clap, shout, whatever, but loudly, in likely habitat, preferably in warmer weather after rain. If present, they quickly answer with a muted but determined nasal twang of a call.

Although relatively common in the WHA, the Red-crowned Toadlet is a threatened (vulnerable) species in New South Wales. It is confined to the Sydney Basin and reaches the western and northern limits of its distribution along the western escarpment of the Blue Mountains and the southern escarpment of the Hunter Valley. We have no records from the three most westerly and elevated reserves of the WHA: Jenolan Karst Conservation Reserve and Gardens of Stone and Kanangra-Boyd National Parks.

Small colonies typically form in temporary watercourses and soaks on Hawkesbury and Narrabeen sandstone ridges and slopes, sometimes in seepage areas at the base of pagoda formations.

Along the network of firetrails in the WHA, the leaf filled gutters that puddle after rain frequently provide habitat. Occasionally, and contrary to conventional wisdom, they occur around volcanic diatremes, in deep sandy alluvium or in rainforest. Their clear, jelly like eggs are laid in localised patches of moist leaf litter, sometimes well away from water.

The seeming local abundance is deceptive. It is all too easy to forget that, for these frogs, the Sydney Basin is the limit of their universe. Even small ridgetop disturbances can degrade vital sheltering and breeding points and make a whole population unviable.