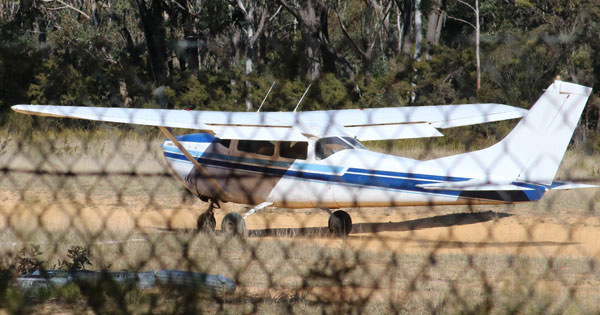 The Department of Planning, Industry and Environment has knocked back an application for a lease at Katoomba Airfield at Medlow Bath after "overwhelming community opposition" to the idea.

Where is Katoomba Airfield? 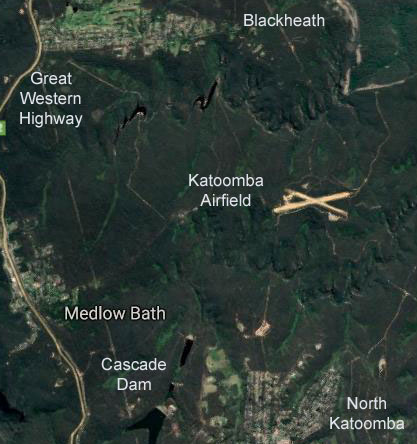 Katoomba Airfield  (click the image to access Google Maps)
Katoomba Airfield is located on Grand Canyon Road, Medlow Bath. The airfield is public (Crown) Land and is managed by the NSW Government through the Department of Industry–Crown Lands.

It is completely surrounded by the World Heritage listed Blue Mountains National Park.

The Department of Industry is currently considering negotiating a new long-term commercial lease over Katoomba Airfield to a private commercial operator.

The previous leasee’s rights over the airfield were forfeited in 2017. In Sept 2017 the Department of Industry called for Expressions-of-Interest (EOI) from parties interested in leasing the site.

As a result of the EOI process, in February 2018, an interim license was issued to a private commercial operator.

The Department of Industry has advised that the licensee was invited to submit a business plan setting out their commercial plans for the site, in preparation to the Department issuing a long-term lease.

No community consultation on options for the future of the airfield occurred prior to an interim license being issued. This would have been the time to consider whether a commercial airfield was appropriate or not. It would also have been the time to undertake an environmental assessment of the land to inform this decision and consider the option of transferring the land to the surrounding national park.

Can Katoomba Airfield be incorporated into the national park?

The NSW Government via the Department of Industry (Crown Lands) has previously carried out many studies of the site, culminating in a recommendation in 2000 that the area be added to the Blue Mountains National Park, with the airfield being used for emergency purposes only.

The National Parks and Wildlife Service manages a number of airfields within national parks for management and emergency purposes. Specific funding to manage the airfield could be allocated to National Parks from the Bushfire Risk Mitigation and Resilience Program managed by NSW Treasury. 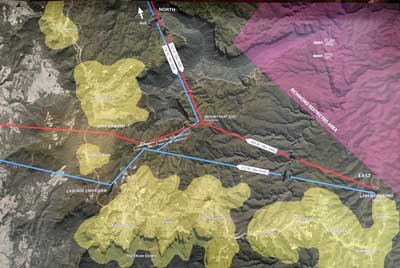 Proposed Flight Paths as presented by Dept. of Industry
Note: the measurements are in feet
(click the image to access a larger version)

The Conservation Society is working with local residents and community groups - especially the Katoomba Airfield Community Group - to ensure that any proposed use of the airfield does not affect residents and compromise the conservation values of the Blue Mountains National Park and in particular the Grose Wilderness Area.

These letters can be found on our 2018 Submissions webpage together with the replies received.

There's also an article on pages 8 & 9 in the October Hut News, and a recent article in the Blue Mountains Gazette.

Aircraft movement in the Blue Mountains can be viewed on the Flight Radar website. Although it should be noted that not all aircraft have their transponders turned on - so although you can hear and see them, they are not on the radar.

A petition with over 10,000 signatures has been presented to state parliament and was discussed on 1 August. Here's a transcript of the speeches given.