The Conservation Society congratulates Susan Templeman (Labor) on her re‑election.

At the close of counting on the night of the election Susan Templeman was leading by 11,994 votes.

The 2022 Federal Election will be held on Saturday 21st May with pre-poll voting commencing on Monday 9th May.

Gazette Ad - 4 May 2022
There are eight candidates contesting the seat of Macquarie.

We asked all the candidates, except one*, questions concerning conservation and the environment. Here's the questionnaire.

Only three candidates responded**. This means that residents in the Macquarie electorate have little information on the other candidates’ positions on crucial local issues, such as ensuring protection of the Greater Blue Mountains World Heritage Area, action on climate change and sustainability, and political integrity.

The outcome of this election will have repercussions both locally and globally - and concerns action on climate change, environment laws and the status of our world heritage national parks.

An election is one of your best opportunities to have a real say about these vital areas.

* One Nation’s Tony Pettitt did not publicly announce his candidacy before the close of nominations on April 21, nor had he made any announcements or provided any contact details prior to the finalisation of this compilation of the questionnaire responses.

** A response to the questionnaire from the Coalition Campaign Headquarters (Liberal/National Party) was received on 4 May - nearly a fortnight after the deadline for responses. The response did not follow the requested format and was received too late to be included in reviews and publicity.

Here's a series of Hut News articles that provide a background to conservation considerations and concerns.

Here's the Australian Conservation Foundation's Where do the parties stand on nature and our climate this election? 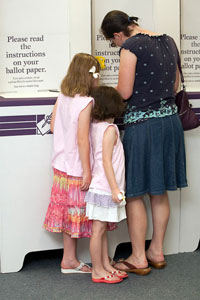 The rolls for the 2022 Federal Election have closed. You can check your enrolment here.

Election day is Saturday 21 May with pre-poll voting starting on Monday 9 May. Here's where and when you can vote.

Here's information on how to vote and a facility to practice voting.

Further information on the 2022 Federal Election can be found on the Australian Electoral Commission website.

The Federal Electorate of Macquarie basically consists of the state electorates of Blue Mountains and Hawkesbury.

If you live in either the Blue Mountains or Hawkesbury local government area, then you are in the Electorate of Macquarie.

© 2022  Blue Mountains Conservation Society Inc.
We acknowledge the traditional custodians of this land
– the Darug and Gundungurra people –
and pay respect to their Elders past, present and emerging.